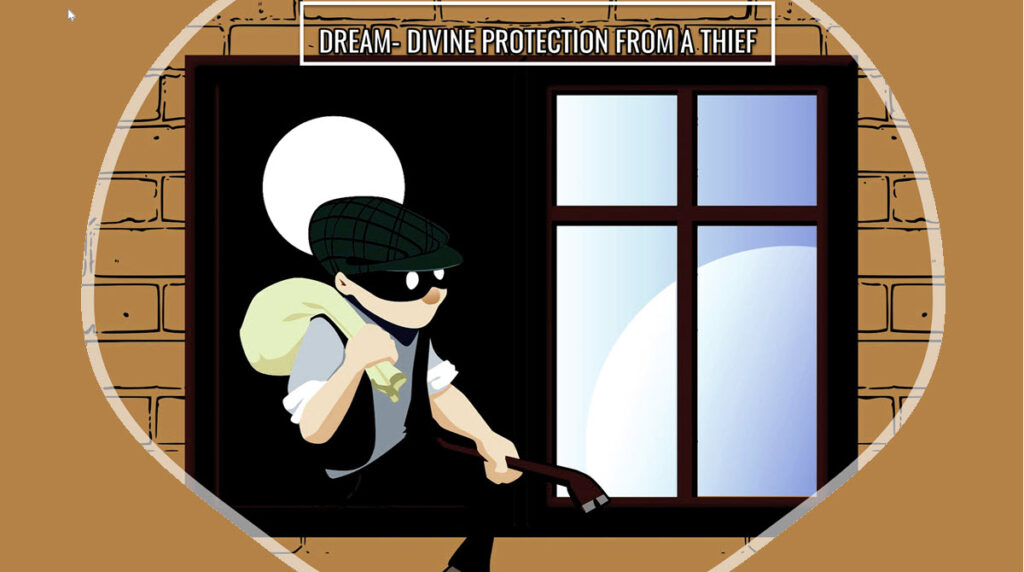 (For privacy, the names of individuals/contributors have been abbreviated or changed)

I had a dream, which signified God’s protection and the authority we have in Him as His Children.

After getting home from working a night shift one morning, I felt strongly in my heart that I should anoint my house with anointing oil and declare God’s protection over it. I went ahead, and did exactly what was impressed on my heart, then went to sleep

My Dream:  A Thief In Daytime

In my dream, my house was being robbed. The house was my childhood house where I grew up in. I was aware there were trespassers downstairs so I called out to them from upstairs, commanding them to drop whatever they had taken. The intruders immediately dropped the items they were attempting to steal.

My dream ended there.

I woke up to find out that an attempted robbery had occurred at my neighbor’s house two doors away from me, while I was asleep. A policeman had responded to a call from someone who saw a man running away from my neighbor’s house and noticed that his door had been broken into. My neighbor who was out at the time, later told me that there was evidence in his home that the thief had tried to steal his property and although there were valuable items that would have been in full view of the intruder, none had been stolen.

The symbols in my dream

My childhood house: symbolic for my present house/ my block

Me: My conscious self

My Actions: spoke with authority, and commanded the thieves to leave my property

Outcome: They dropped my property and left.

The Power of Prayer

I took authority over the plan of the enemy through prayer. I commanded the enemy out of my house with the authority in the name of Jesus and I overcame him through the anointing over my house and the declaration of God’s protection. Through prayer, my neighbor’s home was also protected from theft.

Through my dream, God showed me what could have happened, and how it was averted through obedience (anointing my home at His leading) and though my authority in Christ.

My dream was a divine revelation of God’s protection and faithfulness. I believe I was led to pray and anoint my home against a break-in before I went to sleep. My prayer, anointing my house, and declaration of God’s protection provided a covering over my home. I also believe more damage could have been done to my neighbor’s home and the thief may have carried valuable items away if not for God’s intervention and guidance.

Through this dream, God confirmed to me again that even when we are asleep, our spirit is awake. In addition to this, we have authority through the power in the name of Jesus over the plans or activities of the enemy that God reveals to us in our dreams and visions in the night. The plan of the enemy against me and my neighbor was averted through God’s revelation, guidance, and His mercy.

Dr. Simi Adigun, is a Christian Counselor, a Certified Biblical Counselor, a Master Certified Life Coach and a Christian Life Coach. Her credentials include being a Certified Instructor and Facilitator for the Four Keys To Hearing God's voice. She is the author of the book "21 Destiny Prayers." She finds joy in helping others grow in their walk and relationship with God, by experiencing His love and recognizing His voice. As a Counselor, she helps individuals on their healing journey of hurt and trauma into a place of lasting joy and inner peace, as they allow God to make them victors instead of victims. As a Coach, she helps individuals in developing a deeper relationship with God by recognizing His voice and experiencing His unconditional love. She walks alongside others on their journey of discovering their life’s purpose and divine destiny in order to live a fulfilled life.

Dream Interpretation- Set Free From A Life In Prison